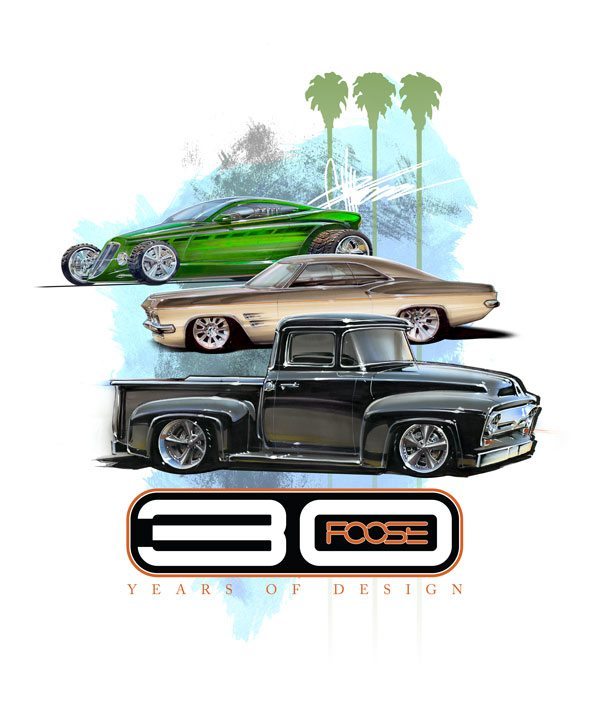 Huntington Beach, Calif. (July 6, 2016) –  Celebrating its 30th anniversary in automotive design, Foose Design and its founder, legendary designer and TV personality Chip Foose, will be featured in an event at The Petersen Automotive Museum in Los Angeles on July 23. The special one-day display will focus on the Southern California native’s automotive design work and his impact on popular culture, and will feature Foose designed vehicles from both The Petersen and private collections, as well as a panel discussion with design legends from the industry.

After three decades in design, Chip Foose is excited to celebrate the anniversary with the display at the Petersen. “I’m thrilled to return to the Petersen Automotive Museum!” says Chip. “It’s hard to believe this has been my life’s work for 30 years and I can’t think of a better way to bring some of my best pieces – and colleagues –  together to make this milestone so much more meaningful. I am grateful to all the people I’ve come across and the design opportunities I’ve been afforded all these years and this display will be a true reflection of my passion in making this my life’s work.”

“Chip Foose has been a true trendsetter in automotive design and what better place to honor him than at The Petersen,” said Petersen Automotive Museum Executive Director, Terry Karges. “Our mission is to educate the public on the history, future and culture of the automobile, and Chip Foose and his work are woven into all three. We have several Foose designs in the Petersen permanent collection already, and we look forward to hosting Chip and showcasing his work at this wonderful event.”

The July 23 display format will consist of a cruise-in for fans to showcase their own hot rods, a display of Chip’s top project models, as well as a panel discussion with leading industry professionals. The day will close with an autograph session with Chip. The display details are as follows:

The list of Foose vehicles to be showcased in the Petersen Automotive Museum so far is as follows:

About the Petersen Automotive Museum

The Petersen Automotive Museum Foundation is a non-profit 501(c)(3) charity. The Museum is located at 6060 Wilshire Boulevard (at Fairfax) in Los Angeles, California, 90036. Admission prices are $15 for general admission adults, $12 for seniors and students with ID, $7 for children ages 3 to 12. Active military with ID, personal care attendants and children under three are admitted free. Museum hours are 10am to 6pm. For general information, call 323/930-CARS or visit  www.petersen.org.

Login to Chip Foose - Official Home of Foose Design, Inc.
Reset Password
Enter the username or e-mail you used in your profile. A password reset link will be sent to you by email.
Already have an account? Login